“My drawings express dissent. At a time of total theoretical and practical stalemate when architecture has been reduced to responding to practical needs, drawings ask questions on how to start thinking of the city again.”

It is with these few, grave but crystal-clear words that Carmelo Baglivo opened and summed up a fine exhibition curated by Emilia Giorgi for the Fondazione Pastificio Cerere. It displays a small sample of the countless drawings and collages produced by a founder of IaN+, one of the best-known and most active practices in the theoretical debate on the Italian scene of the last 20 years.

The link with the practice’s work – stressed by the architect himself during the inaugural debate in a Pastificio Cerere packed with many friends and protagonists of Italy’s contemporary architectural and art scene – is very apparent and fundamental. The collages are not a stepping away from the discipline (an attempt to escape reality and seek refuge in the tranquil realm of drawing) nor even a distancing from design practice (an escape from the complexity of architectural practice, which has to cope with the reality of design contexts). On the contrary, the collages (and even more so the drawings) are a founding experience but also complementary and a return in the close debate with the practice and his partner Luca Galofaro, in particular, on the intense activity of architectural production. 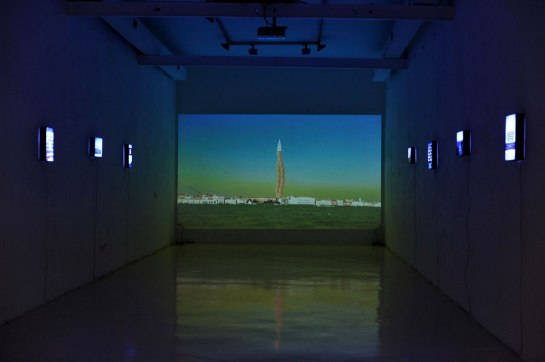 The connection between the two activities (collage and IaN+ production) may not be clear to those unfamiliar with the practice’s work and its constant reflection on the nature and reasons of urban space, on the need for every design to express an idea on how to live the city and on the profound need to establish a model of the city before setting out to draw the single object. But the themes of upgrading the city (via a Koolhaas-like urban cannibalisation), inhabiting the city centre and surplus value, i.e. the production of hybrid buildings that offer a multiplicity and density of uses and functions (all IaN+ design themes), establish and lend substance to Baglivo’s powerful visions which, released from the demands of construction reality, explode with overpowering drama.

This means that the image always focuses on the city and the relationship between object and context, between a new that is added over and sometimes under or amongst what already exists. They always manifest the potential for complicity and alliances between past and present, albeit without hiding the unambiguous and blatant differences. In a city such as Rome, where every opportunity to insert contemporary architecture into the old city centre becomes the target of scarcely credible debates on the appropriateness of giving the contemporary space amongst the giants of the past (see the controversy unleashed by the Ara Pacis and, more recently, the Fuksas Lanterna), Baglivo’s images reiterate the appeal of and need for dialogue between new and old, and the possibility of keeping the city and its protagonists alive, be they buildings, spaces, bridges, avenues or squares. 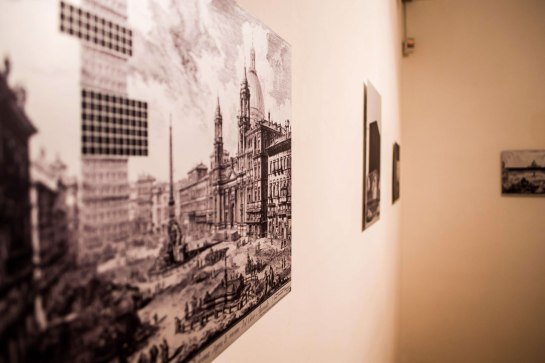 This operation of overwriting in particular, which is in tune with the very essence of the collage, seems the most fruitful and full of promise, not only as regards the historic city and architecture of modernity (from EUR to the motorway service station) but also, perhaps, for potential operations to recycle and upgrade the more anonymous parts of the outer city. 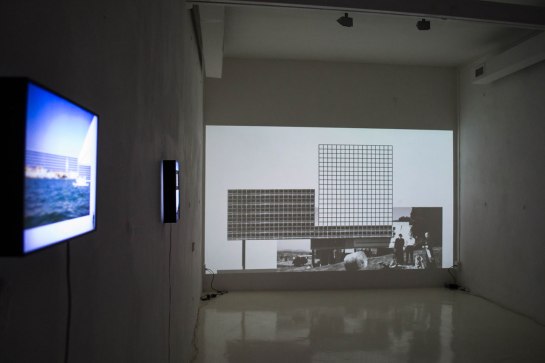 On the subject of overwriting, the exhibition is spread over three rooms –  the first devoted to handmade ink drawings and sketches, the second to eight aluminium-plate prints of collages produced in the last two years and the third (to my mind the most convincing in terms of image rendering, which clearly originated on the screen) containing eight lightboxes – and ends with a video installation on the back wall featuring a slideshow of countless collages, accompanied by music created by Federico Giangrandi and Simona Marino. The composition was inspired by Baglivo’s works and is, in turn, an overwriting operation: a mix of the music and exact forms of a three-part piano sonata by Bach and three voices sung by Simona Marino. The whole produces a vibrant counterpoint that brings Baglivo’s visions even more to life. 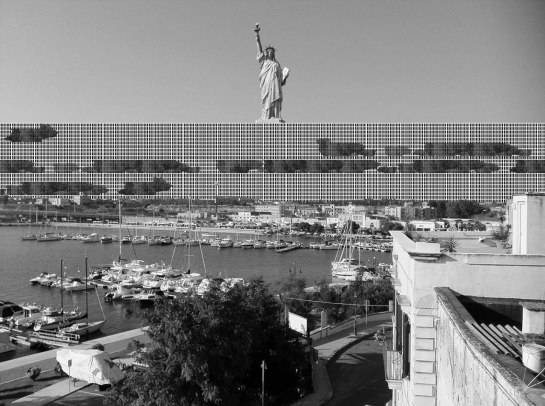